The most frustrating part I see when I read online in places like Reddit or other social media platforms is that many of us don’t understand or we try to rediscover terms. We try to give reasons on why people say the things they say or do the things they do. I often see people struggling to define a pattern of behavior in themselves or others and give a psychological explanation, not realizing that what they’re describing has already been observed and defined by psychoanalysts before them.

I think a big reason for this is due to the esoteric nature of Jungian psychology itself, as well as in the age of science and objective-ism, using these philosophical and religious-like terms often get dismissed as pseudoscience if not nonsense.

Here is a visual representation I made to help identify these terms. 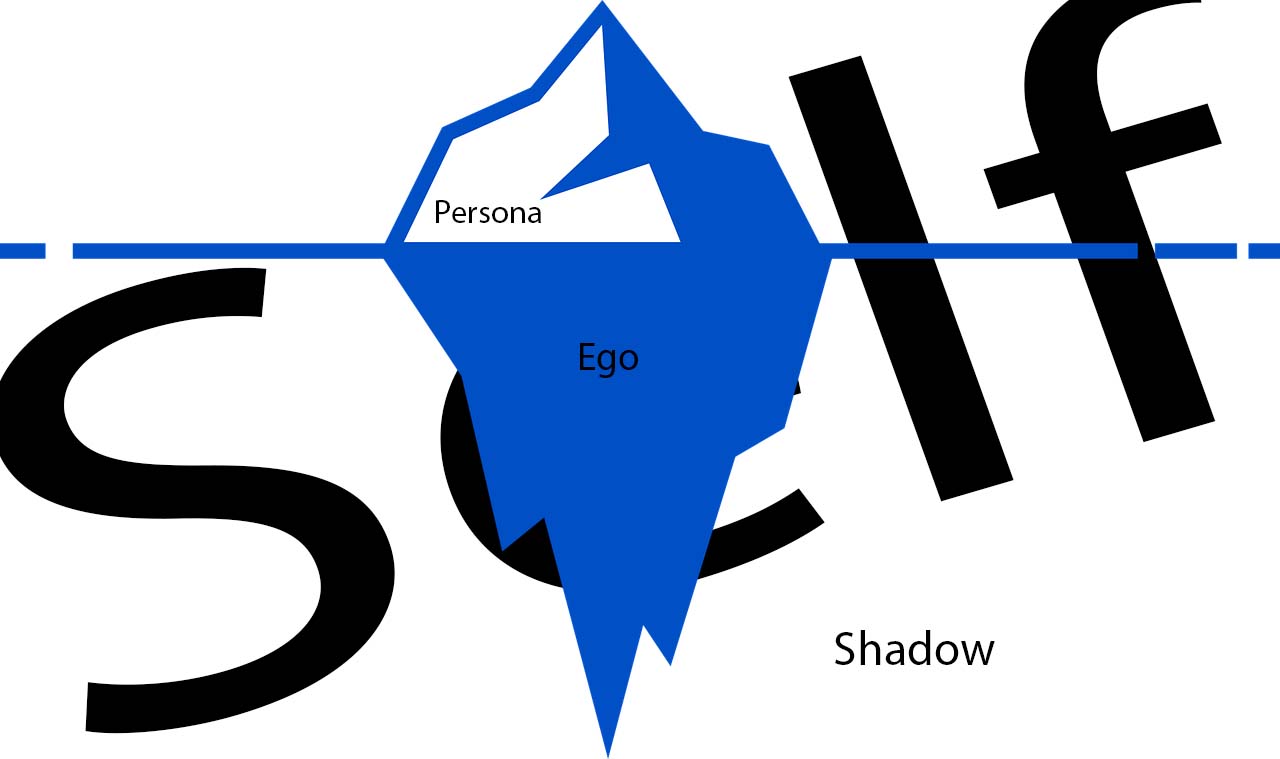 The persona is our “social mask”. It is probably the one that is the easiest to identify within ourselves, as well. Using the Iceberg analogy, it is the thing that sits above the water that everyone can see. In a sense, it’s also the only thing we have a sense of control over.

I’m not going to go into this too much as I do think it’s very simple to understand.

This part of ourselves is often misinterpreted but actually, we’re usually very aware of it. I think most of us have an idea of what an “Ego” is, but I do believe a lot of us don’t realize how it relates to us in our own self-image.

We often hear that people with narcissistic personalities have a “big ego”. But what does that mean? It’s like if were to ask someone, “What do you mean by ‘ego’?” I don’t think many people would really know how to describe it.

I find that the simplest definition of Ego that I’ve come to understand is it’s the thing that protects us from feeling vulnerable. In other terms, it’s the hidden persona that protects our “Self”, but it’s not usually seen by others, hence the bottom part of the iceberg that sits under the water.

This, like the ego, is deeply misunderstood, but the key difference here is most of us are not aware of what the Shadow is, or how it impacts our personality.

Have you ever had violent thoughts or even small outbursts of anger and upon self-reflection you think “That’s not me. I would never do that.” That’s the Shadow speaking and the Ego protecting you from identifying with said thoughts or actions. The Shadow is, at its core, the dark parts of us that make us human.

The Shadow is called the Shadow, I believe, because it’s much like our own shadow we see in the sunlight. If you go outside and look down, what do you see? Your shadow, right? Would you say that this “shadow” is you? Some would say no, and then go off and give a scientific answer of how light, reflection, and movement works, and could give a very “academic” reason why this shadow is not you, but it doesn’t feel like the “right” answer.

The simple answer is yes, this shadow, caused by you blocking the sunlight, is you. When you move your hand up, the shadow moves with you. When you run, it matches your speed. And, while we don’t usually think of it like this, even in the dark, our shadow is still there, we just don’t see it.

Much like we don’t think we’re the kinds of people who could say or do the things we see on TV or the thoughts that cross our minds, we need to understand that we are, indeed, capable of becoming these people ourselves, no matter how twisted and evil they may be.

I always felt like this was a good metaphor because it highlights the fact that most of us live in the dark, unaware of our own shadow. It’s only until you step into the light do you see what’s behind you. To relate this to the Iceberg, it’s like the water. The movements of the water control where it will flow. While we might think the Iceberg moves on its own, it’s the water underneath that controls everything.

This is by far the least understood part of ourselves, though, I do think a lot of people actually can vaguely describe what it is. The Self is who we are when stripped away of our persona, ego, and shadow. But that in itself is a very hard thing to describe because we don’t have an answer to the age-old question: “Who are you?”

How do you answer that? Think about your own identity. Are you a doctor? Are you a student? Are you a son? A daughter? Are you a teenager? A senior? Just because you can identify with something now, you may not be able to identify with the same thing in the future. But you are still you, regardless of the title that comes with it.

So then, with that logic, what part of you make you, you? This is a question that has been asked many, many times, one of which has, in turn, produced many, many answers. I think the best answer I’ve heard is you are the summation of your circumstances (both biological and societal), personality, and experiences. I think this also includes your thoughts, too.

And so, with a definition like that, it makes it very hard to actually identify where the Self is. That’s why in the diagram I made the self as the entire area that the iceberg sits in including the ice, water, and the sky.  This is the best representation I could find.

So you can think of it like this: It’s the thing that unifies the unconscious with the conscious.

The most challenging part of the Self is that it cannot be accurately described in words and only experienced. By the very nature of translating it into words, it diminishes the experience, no matter how accurate you choose your language.

Think of it as describing a dream to someone. You’ll never be able to convey the same emotions and feelings you had in the dream as you were the sole experiencer. Even if you attempt to describe it to yourself, you’ll often find the words you choose can never properly encapsulate the feeling.

I believe that these terms, although give off a very “pseudoscience” feel to them, they become pragmatically true. They map onto our personalities very well and can be used to explain much of how we think and explain who we are.

I do hope as time goes forward, many of us can learn to take a deeper understanding of who we are.